Posted by Wallace Hunter on November 14, 2017
Tour Das Hugel was this weekend.  I can confidently say that is one hell of a ride!!! 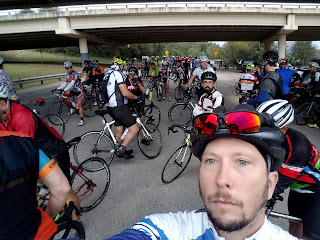 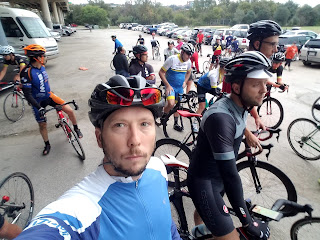 I rode the complete ride thanks to my buddy Cody Summers.  He is in the pictures wearing black.  He played a critical role in navigating us through the ride for the whole 110 miles. 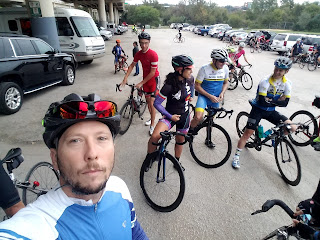 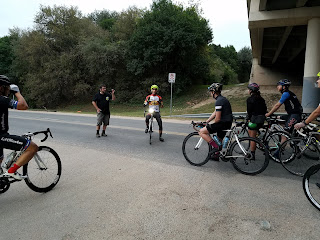 I tried to setup the course in my Garmin, but after the 7 am start, the directions were not loading.  About 20 miles in, I noticed that the directions were not displaying as one would normally expect.  I totally disregarded that until we got done with the first lap, which was about 40 miles.  Then we stopped at the car and ate lunch.  I had brought pocket bread, rotisserie chicken salad, tomatoes, onions and I put that together for a nice sandwich.  Cody had bananas and PB&J!  Classic and so much more simple than mine. 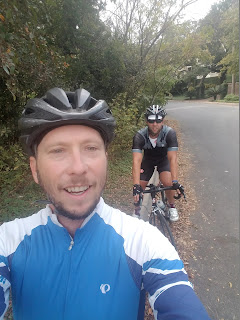 Once we started again it was clear that I needed to attempt to fix the mapping situation on my Garmin.  So I stopped the course and then restarted the course on my Garmin Edge 1000.  The problem was that there were overlaps in the course, and that caused problems.  Now the Garmin kept telling me to turn around and do a U-turn.  This, to my interpretation, was because the route we were riding on was the return route.  This meant that the Garmin cannot distinguish anything but the idea that you are heading to the finish line.  I was totally insecure and I was totally upset that somehow we were going to get off track and that the full route was somehow not going to get completed.  If that happened, then I would FAIL!!!  I know that some people would disagree and not be so hard on themselves, but this is the Hugel!!!  I mean take my buddy Keith, in my mind he sort of had an epic fail.  He rode with someone who was unprepared, and they even missed 18 miles of the route.  So does this mean he rode the Hugel?  Not really.  One could only say that he "attempted the Hugel".  In this case, I give Cody so much credit for my luck in choosing a great riding buddy. 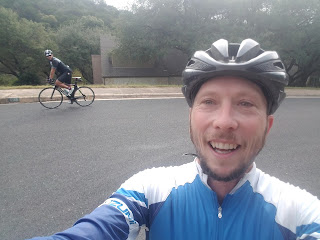 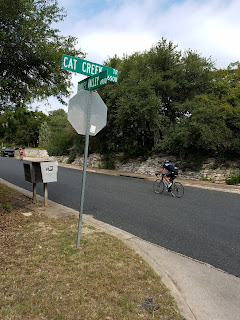 Here in the 2 above photos, is Cody and I about to hit one of the hardest & steepest climb of the whole ride.  Smokey Valley!!!  Many riders just got off their bikes and walked.  I used a slow and steady method, which got me to the top, no stopping, no foot on the ground, and no zig zagging.  I went straight up the hill!  I felt that was due to the gearing that I chose.  To be clear, I rode an 11-34 cassette while Cody rode an 11-28 cassette.  I will be posting a new updated overview, no review, of that new drivetrain that I am riding at this time. 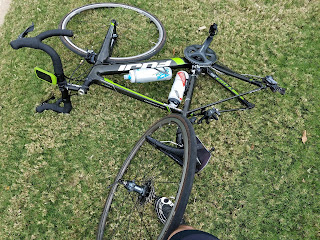 I got 2 flats on the ride, and I really learned a lot from those experiences.  I carried 2 tubes from the start.  When I got the first flat, I had 1 CO2 (not good) and a hand pump for the ride.  I was priming the first tube, before using my only CO2.  Much to my dismay, the tube had a hole, and it was useless.  Cody could not find his patch kit, and so I went to the second tube I had in the bag.  Which now left me with NO tubes in spare.  Bad planning.  I should have checked my tubes ahead of the ride and taken inventory in my seat bag.  That was my fail.  Maybe an hour later, I got another flat on the second tube.  But this time Cody handed me a tube, and just as he handed it to me, he found the patch kit and I went with patching the tube.  So I ended up riding the rest of the ride with the patched tube, and suffered no other issues after that.  Man was that just terrific. 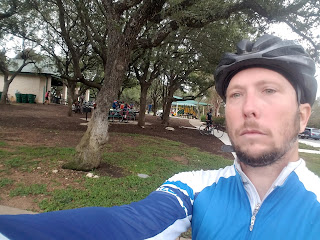 This is a shot of the rest stop at mile 70, and then back around at about 87 miles.  They were packing up and we grabbed water and something snacky and rolled to the finish line.  Below is a shot of the dam that we visited after the first rest stop and before the revisit of that stop. 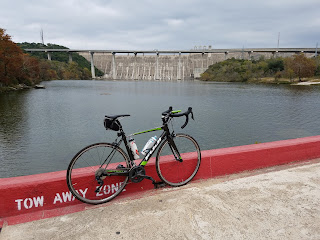 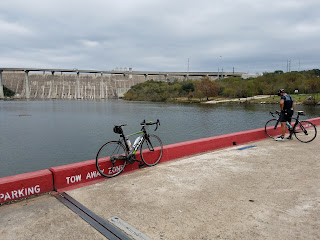 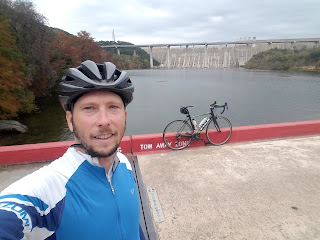 This shot of my Garmin is at the second rest stop. 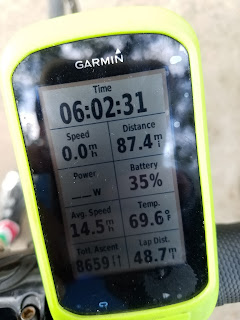 Below you can see the shot of downtown Austin from the route.  That was so much more of a beautiful shot at this point than that picture can provide. 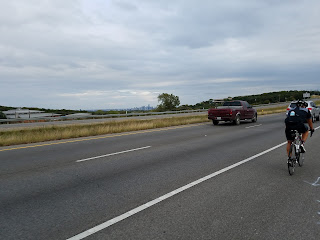 Once we returned and got our shirts, we could also have beer.  I chugged this PBR!! 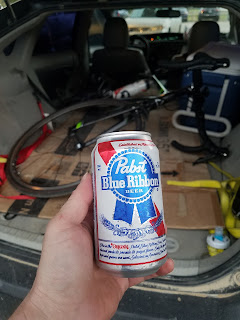 To those who are new, to those who I meet at REI, and to those who have been reading for a long time, I would like to say thank you.  I thank you for stopping by, supporting me and my site, and for being into the subject matter that I too enjoy thoroughly. With school over and the holidays coming up, I hope to get some real blogging started, and also to get some videos going again.  Also we are planning a camping trip in January.  So that ought to yield some pretty awesome footage that I hope to be able to post about.  I still owe something from the hike that used the REI equipment.  So at last here is an unedited clip from the trip to Lost Maples State Natural Area with my buddies Scott and Chris. Cheers... 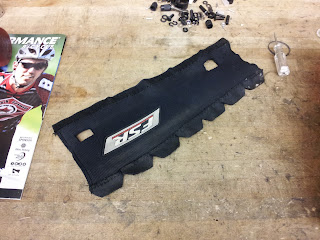 I took this dusty very fragile neoprene & velcro cover to the sink, hand washed it, and set it aside.