What happened, and the Carbon bike you never saw...

Posted by Wallace Hunter on August 13, 2012
I am trying to get to documenting all the things that have happened with the bicycles and my training.  But honestly I have not made enough time to prioritize the time to get all the details laid out.  But the reality is that a LOT has happened and I am just starting to get the chances to get the specifics put into blog posts that will be coherent and orderly so that things start to make sense.

I had made a few posts about the Hike, Bike, Dale team bike (red one) that got ruined by the painter.  So that painter committed to buying me a new frame.  I gave the painter the frame choice, price, and ordered it.  But truly I ALSO decided to get myself a new carbon bike.  I felt motivated about the road riding and I felt that I would benefit from the attributes that come from riding carbon.  So I ordered myself a Fuji Team Replica from the store through Fuji themselves.  This is a Pro-deal and I won't discuss that further.  This type of deal is (information wise) only for employee's of Performance and or any outdoor retailer.  So let's get on with the details.

Fuji makes a Team Replica bike that I had been eyeing and I really wanted it badly.  It was a small bump up in components, but a large jump in overall quality over the bike that I was riding before.  Instead of trying to outline all the details, I prefer to just put a picture up and let you click on the link if you want to read all the details.  But I fell for it and I just had to have it. 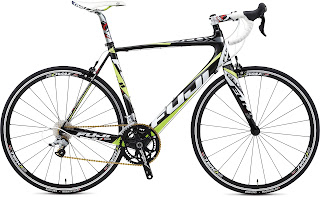 Now that you are informed about the bike I bought and you have all the details, I can say that this is a SWEET ride.  It is not the highest quality in the world, and it is made in Taiwan/China, just like a lot of bikes in the industry.  I wished that I could live by my ideals, but unfortunately sometimes we have to give up what we like/want for what is possible.  We don't always have the chance to buy things or enjoy the things that are most in line with out values.  Therefore we end up making compromises & sacrifices that help to make ends meet.

About the time that I got this bike, it was raining a lot.  I mean a LOT.  Which is kind of rare in San Antonio.  I really wanted to get out after having ridden this bike the first time.  Here is a link to my first ride.  Here is a link to me going for breakfast and to Starbucks after that first ride.  I had about 33 miles on it from this point.  But it kept raining.  So the first chance I got was a day that no rain was falling.  I figured that since the Leon Creek Greenway was where I had been riding, that I would be fine.  After all it is a concrete/paved trail that should be dry by now.  I was right & wrong at the same time.

I got a few miles down the trail and turned to go under a bridge.  The sidewalk here is very low and literally runs across the creekway where water flows after rains.  There was a very thin... I mean VERY thin layer of clay/mud on the trail.  I had just past a group of joggers that I called out to let them know a cyclist was about to overtake them.  I went by them and turned to go across the creekway on the sidewalk.  However, the thin mud caused the bike to jump out from under me and I ended up on the drive side of the bike.  I slid from 12 miles an hour or so through the mud and right into a puddle of water that might have been 4 inches deep.  I stopped because I hit the man made rock wall that was in place there.  It was insulting.  I cannot believe that I had done this.  My brand new carbon bike, and what the heck went wrong?  It happened so fast... I could not believe it.  Here are a few photos of me after the ride. 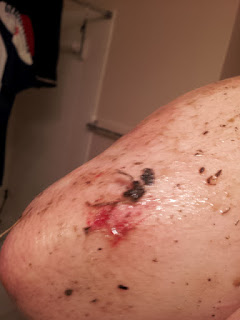 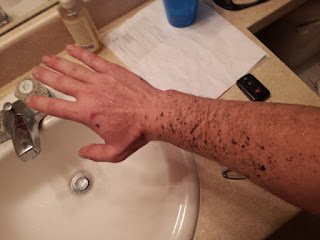 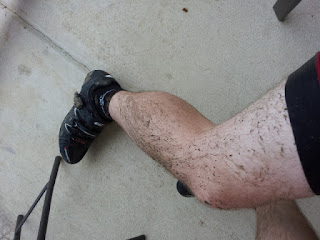 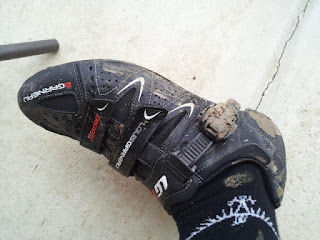 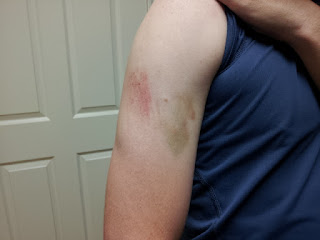 I actually hurt myself a bit in the process of this fall.  I don't show you my hip... that had lost a bit of skin.  I was of course covered in dirt, my shoes were muddy, and my arm was really bruised up good.  I bent the derailleur hanger on the bike, and replaced that with the extra one that shipped in the box.  I jammed a finger, my ring finger on the right hand... which still has discomfort to this day.  This fall happened on July 10th, here is a link to this ride.  So quite a bit of time has gone by since then.  I wanted to get this story out and let everyone know what happened.  It was shameful, and I learned a lot that day from this incident... mostly that this has happened to every new rider, and that I was just on a learning curve.